… As we were walking through that dark forest, I suddenly saw a light coming out of nowhere. It was a blue light that was moving very fast. I was frightened, so I jumped in

Jack’s arms without thinking. When my brothers saw me trembling like a leaf, they asked me why I was so scared. I told them about the mysterious light. But as we kept looking around, I realized it had disappeared! Jack and Scott tried to comfort me; they were saying it was just my imagination. Since both my brothers know about my night phobia, they must’ve thought I was hallucinating. But I was sure of what I’d seen. It wasn’t an illusion. It was real. And I was even more scared. Anxious, I followed my brothers while watching the eerie-looking giant trees under the pale moonlight…

Suddenly, that blue light appeared again. But this time, it came straight towards me. I was terrified. I couldn’t move, nor scream. I felt as if my body was nothing but a block of ice. I even thought I could hear my heart beat like it was about to come out of my chest. The first thing that came to my mind was to look for my brothers. But when I noticed that they were nowhere to be seen, I almost collapsed. However, slowly, the light took the form of a silver fox. I was mesmerized by the beauty of its eyes. Those blue deep eyes were hypnotising me.

The fox made me follow it through the forest. It felt like a dream. Somehow, the forest wasn’t dark anymore. I even thought I’d heard the trees singing in an enchanting mermaid-like voice.

When I could finally see the road outside the forest, the fox transformed into a beautiful young lady. She had long silver hair and was dressed like a fairy. And her eyes were the same as the fox’s; blue and deep. She had a pretty and friendly smile on her angelique face. As she gently took my hand, I felt her soft but cold skin. In a magical voice she hissed: “Don’t be scared. I’ll protect you. My light will follow you everywhere you go, and the darkness will go away.” She smiled again, changed into a shining white butterfly, and flew away, leaving me at the edge of the forest, smiling like an idiot.

My brothers found me a while later laying on the ground. They were worried so they took me to the hospital. But I was alright. In fact, I’ve never felt that happy before.

Until now, I’ve never told anyone about what happened in that forest. And since then, I wasn’t scared of dark places anymore.

Was it a dream? It couldn’t be… Could it? 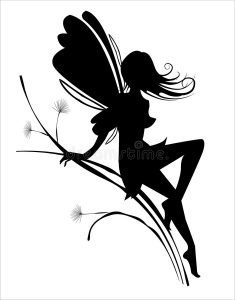